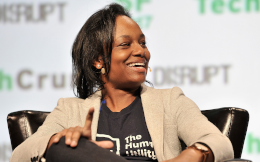 Tiffani Ashley Bell is Founder and Executive Director of The Human Utility, a platform bringing people together from around the world to help people in Detroit and Baltimore with their water bills.

Since its founding in July 2014, the organization has helped nearly 1,000 families and is a Y Combinator-backed not-for-profit (W15).

Tiffani was a 2017 Technology & Democracy Fellow at the Harvard Kennedy School of Government. She was also a 2014 Code for America Fellow and previously, was the CEO + founder of Pencil You In, enabling businesses to accept appointments online.

Tiffani is a developer working primarily with Ruby on Rails and iOS. She finished at Howard University in 2008 with a Bachelor of Science in Systems & Computer Science.